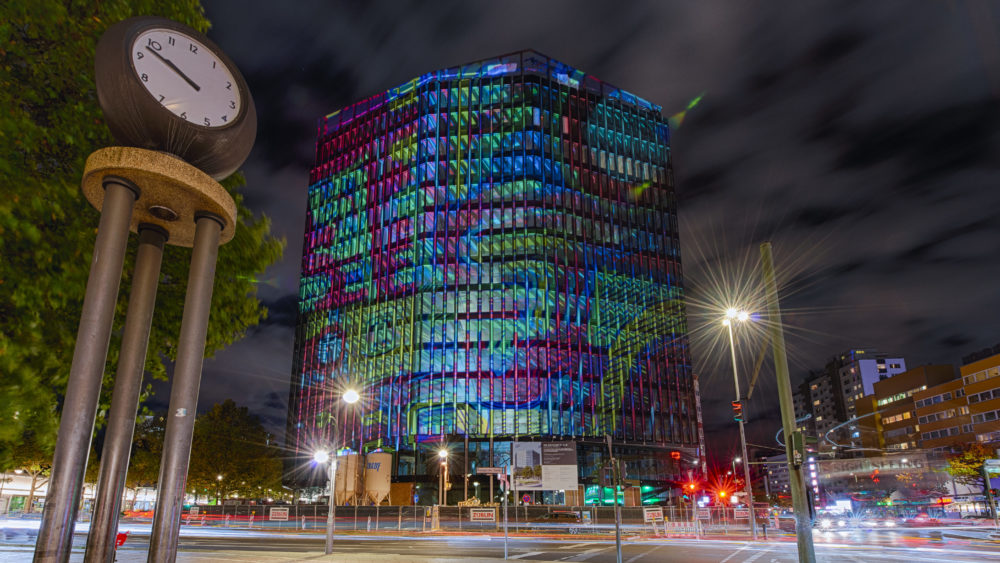 Comeback of a forgotten masterpiece

"The Westlight" is the name of a new 15-story high-rise in City West across from the Zoological Garden. During the construction work for the new building, a lost work of art was discovered. It was a huge walled-up mural - also called a "mural" - by Scottish Pop Art pioneer Sir Eduardo Paolozzi († 2005) from 1976. The Berlin art world was surprised and fascinated.

During the 2019 FESTIVAL OF LIGHTS, an art projection on the façade of The Westlight was to appropriately spotlight the rediscovered Pop Art treasure.

Using high-intensity projectors and a creative image concept, an artistic pop art projection was staged on the glass façade of The Westlight to commemorate the lost mural.

The projection was presented by Barings, a global financial services firm with offices in 16 countries that combines traditional wealth management with innovative capital solutions.

Success: A highlight for The Westlight

The spectacular art projection and the associated media presence in the FESTIVAL OF LIGHTS multimedia channel led to a wide distribution of this unique comeback story - in close connection with the new building The Westlight and the presenter of the action, the company Barings.