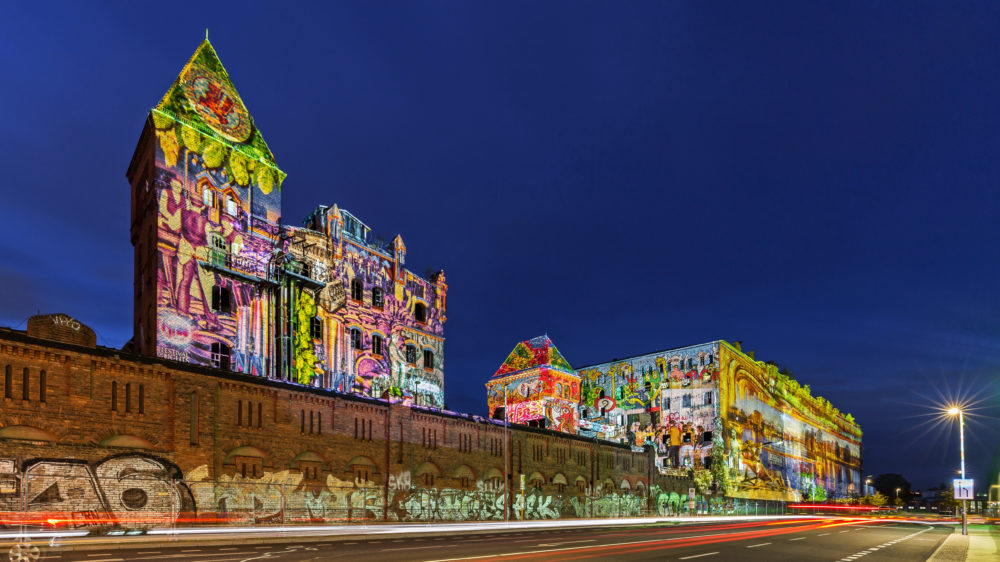 New life for an existing site

Bärenquell in Berlin Niederschöneweide was one of the oldest and most traditional breweries in the city. The last beer was brewed there in 1994, after which the site fell into a slumber and became a "lost place".

After 25 years of vacancy, new life is at last returning to the old brewery site. The FESTIVAL OF LIGHTS 2019 should draw attention to this with a large artistic façade projection.

The FESTIVAL OF LIGHTS transformed the panorama of the brewery buildings into a colorful collage that put the past, present and future of the Treptow-Köpenick district and the brewery site into the picture. The abandoned brewery suddenly seemed alive again. Starting from the history of the site, colorful graffiti scenes and an atmospheric city panorama created a link to the new living space.

The art spectacle was made possible by the project developer HCM, which intends to turn the site into an important meeting place with space for creative industries, retail, gastronomy and culture over the next few years.

The spectacular panoramic projection was opened with a kick-off attended by representatives of the district office, the economic development agency and the investor. During the festival, it generated widespread media coverage and many enthusiastic visitors on site.

The impactful launch allowed HCM to secure broad, positive attention for its project among stakeholders and the general public.