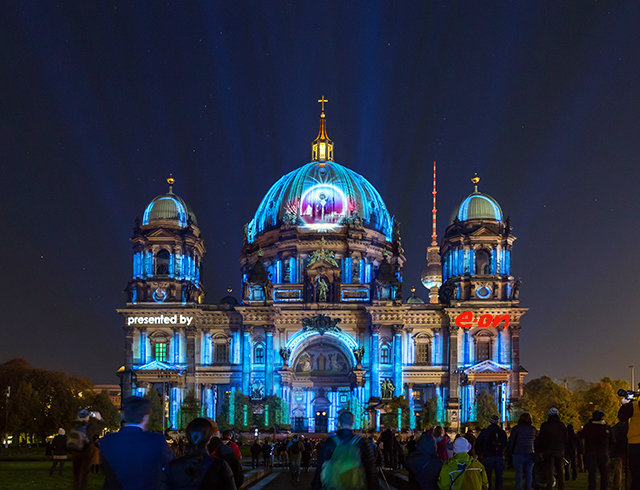 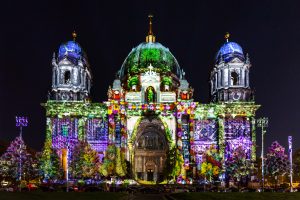 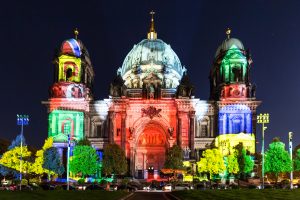 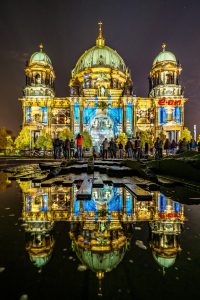 Task: To put the brand in the best light
E.ON used the festival to emotionalise its own brand. With a spectacular presence, which was made known worldwide via social networks, the company secured broad attention, positive perception and an attractive image transfer.

Idea: Dialog also works through visual storytelling on building facades. This creates a different, rarely achieved intimacy between the embassy country and Germany. E.ON presents the best of the best
E.ON becomes the main partner of the FESTIVAL OF LIGHTS and presents i.a. the "World Championship of Projection Mapping". In addition, the company has initiated its own FESTIVAL OF LIGHTS Award. The theme of the award is ideally suited to the companies core competence: "Creating Tomorrow".

Implementation: A world champion appearance
In 2017, the "World Championship of Projection Mapping" took place on the most symbolic German monument for the first time: the Berlin Cathedral. Around the globe, well-known mapping artists have been invited to submit their interpretations and inspirations. The jury selected the finalists from numerous contributions. An online voting allowed the audience to select their favorites. There was an exciting competition until the winner was announced on the last day of the festival. In 2015, the Brandenburg Gate and in 2016 the TV Tower hosted the championship. E.ON was at the forefront. The distinctive trademark was projected onto the respective landmarks in the show intro.

Result: World-wide feedback
More than 2 million people watched the shows of the World Championship live. At the same time, the event was advertised on the FESTIVAL OF LIGHTS communication platform and on all social media channels. The result was impressive: a spectacular event with a global impact - always keeping an eye on the E.ON brand.